This news release constitutes a "designated news release" for the purposes of the Company's prospectus supplement dated December 10, 2021 to its short form base shelf prospectus dated October 27, 2021.

The assays presented herein are for the first step-out drill section located 100 metres along strike of previously identified porphyry-style mineralization at La Garrucha.

Alastair Still, CEO of GoldMining, commented, “This is a great start for our 2022 La Garrucha drilling program at the La Mina Project in Colombia and our broader strategy to unlock value from our portfolio of gold and gold-copper projects located throughout the Americas. This also builds upon the La Mina Preliminary Economic Assessment* announced earlier this year that focused on the La Cantera and Middle Zone deposits of the project which are located 1 kilometre to the west of La Garrucha. Our team believes that the La Garrucha target remains open for expansion and is shaping up as a third possible porphyry deposit which could contribute potential additional resources to lead the growth of the La Mina Project.”

Tim Smith, VP Exploration of GoldMining, commented, “These results from the first two holes of our 3,600 metre drilling program (announced April 12, 2022) confirm that the La Garrucha porphyry mineralization extends to the southeast along strike as modelled from our geophysical dataset and interpreted by our technical team. Drilling is continuing on the next two drill fences located on 100 metre step outs southeast along strike. We expect that those assay results will be released in the coming months as they become available. With the association between bedrock magnetic highs and porphyry-style mineralization now confirmed, we are further encouraged by the presence of additional magnetic targets located within the broader La Mina property which will be systematically explored for additional Au-Cu porphyry mineralization.”

*The Preliminary Economic Assessment referenced above, announced January 12, 2022, is preliminary in nature and includes inferred mineral resources that are considered too speculative geologically to have economic considerations applied to them that would enable them to be categorized as mineral reserves, and there is no certainty that the preliminary economic assessment will be realized.

Drill holes LME1107 & 1108 were drilled on a NE-SW oriented section located 100 metres southeast of the previous Bellhaven drilling at an azimuth of 220⁰ and at hole inclination of -50⁰ and -70⁰ hole respectively (see Figure 2). Drilling has confirmed the continuation of porphyry mineralization southeast along strike. Gold and copper mineralization is coincident, and higher grades are associated with a core potassic alteration zone within the porphyry intrusive complex, quartz stockwork veining and both vein-hosted and disseminated sulphides including pyrite, chalcopyrite and lesser bornite. Detailed core logging is ongoing, including re-logging of the previous Bellhaven core, to place copper and gold mineralization in spatial and temporal context with the hosting porphyry intrusive complex. Geological 3D modelling and subsequent resource modelling will take place in the latter part of the year following conclusion of the drilling program.

Step-out drilling is currently ongoing on a second drill fence located 100 metres along strike to the southeast of LME1107 & 1108. A third fence is planned an additional 100 metres southeast along strike pending visual observations of the drill cores. In addition, the drill will return to the LME1107 & 1108 drill pad to re-enter and deepen LME 1108 given that core assays indicate that the hole ended in mineralization.

Additional information regarding the La Mina Project, including existing resource estimates and past work at the project, is set out in the technical report titled "NI 43-101 Technical Report and Preliminary Economic Assessment, La Mina Project, Antioquia, Republic of Colombia" with an effective date of January 12, 2022, which is available at the Company's website at www.goldmining.com. 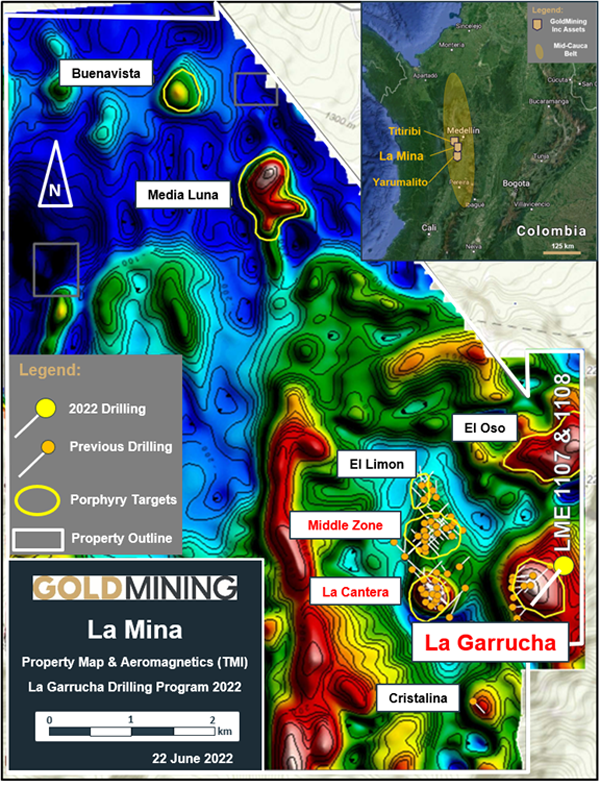 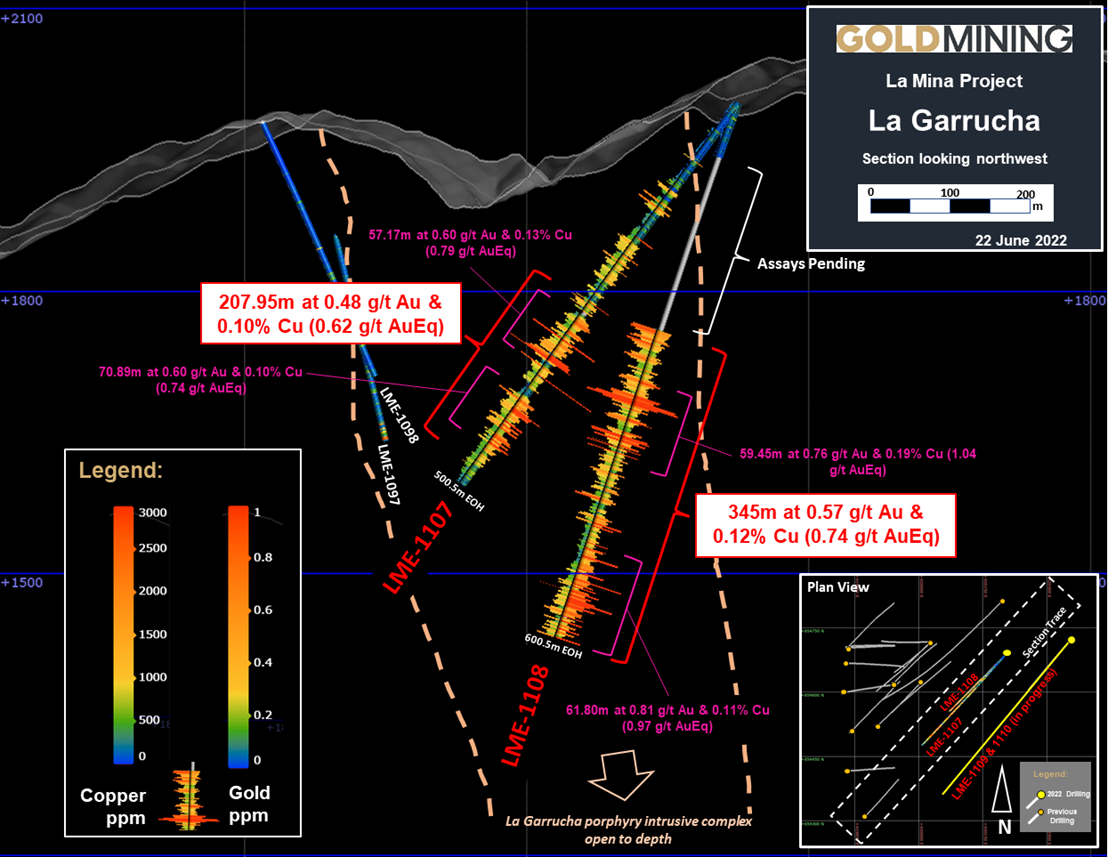 Table 1 – 2022 La Garrucha gold assay results for the first two holes of the drilling program received as of 22nd June 2022.

*Au Eq calculated using US$1600/oz gold and US$3.39/lb copper, as per the La Mina PEA (see January 12, 2022 press release and ‘NI 43-101 Technical Report and Preliminary Economic Assessment, La Mina Project, Antioquia, Republic of Colombia’ with an effective date of January 12, 2022). Results are presented as core length and assays uncut as there are no high grade outliers in the sample population. Results to date are insufficient to determine true width.

Paulo Pereira, P. Geo., President of GoldMining, has reviewed and approved the technical information contained in this news release. Mr. Pereira is a Qualified Person as defined in National Instrument 43-101.

For this program of drill core sampling, samples were taken from the NQ/HQ core by sawing the drill core in half, with one-half sent to ALS Colombia LTDA in Medellín for assaying and the other half retained for future reference. Sample lengths downhole range from a minimum of 0.50m to a maximum of 2.10m. ALS Colombia LTDA is a certified commercial laboratory located in Medellín, Antioquia, Colombia and is independent of GoldMining. GoldMining has implemented a stringent quality assurance and quality-control (QA/QC) program for the sampling and analysis of drill core which includes insertion of duplicates, mineralized standards and blank samples for each batch of 100 samples. The gold analyses were completed by ALS Au-AA23 method (fire-assay with an atomic absorption finish on 30 grams of material). Repeats were also carried out by fire-assay. Copper analyses were completed by ALS ME-ICP61 method (four acid digest with ICP analysis).

GoldMining Inc. is a public mineral exploration company focused on the acquisition and development of gold assets in the Americas. Through its disciplined acquisition strategy, GoldMining now controls a diversified portfolio of resource-stage gold and gold-copper projects in Canada, U.S.A., Brazil, Colombia, and Peru.  The Company also owns more than 20 million shares of Gold Royalty Corp. (NYSE American: GROY).

This document contains certain forward-looking statements that reflect the current views and/or expectations, including statements regarding the Company's expectation, future potential and future work programs at the Company’s La Mina Project. Forward-looking statements are based on the then-current expectations, beliefs, assumptions, estimates and forecasts about the business and the markets in which GoldMining operates. Investors are cautioned that all forward-looking statements involve risks and uncertainties, including: delays to plans caused by restrictions and other future impacts of COVID-19 or any other inability of the Company to meet expected timelines for planned project activities; results of exploration programs may not confirm expectations; the inherent risks involved in the exploration and development of mineral properties, fluctuating metal prices, unanticipated costs and expenses, risks related to government and environmental regulation, social, permitting and licensing matters, and uncertainties relating to the availability and costs of financing needed in the future. These risks, as well as others, including those set forth in GoldMiningꞌs Annual Information Form for the year ended November 30, 2021, and other filings with Canadian securities regulators and the U.S. Securities and Exchange Commission, could cause actual results and events to vary significantly. Accordingly, readers should not place undue reliance on forward-looking statements and information. There can be no assurance that forward-looking information, or the material factors or assumptions used to develop such forward-looking information, will prove to be accurate. The Company does not undertake any obligations to release publicly any revisions for updating any voluntary forward-looking statements, except as required by applicable securities law.